5 players who appear phenomenally in the 2022 World Cup Round of 16: Not Messi or Ronaldo! 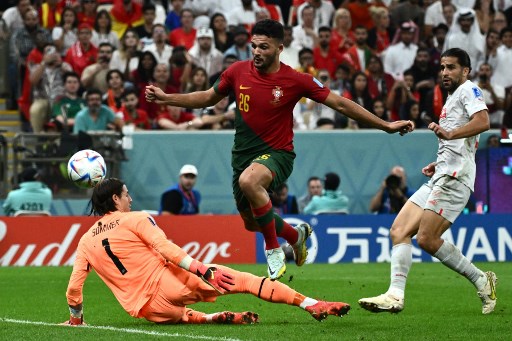 Jakarta: World Cup 2022 Qatar leaving just eight countries vying for the title. Their success in reaching the quarter-finals cannot be separated from the captivating performance of their players in the round of 16.

Out of the eight matches that went to the Round of 16, we recorded a number of players who shone and played an important role in their country’s success by securing tickets for the Quarter-Finals which will be played from the 9th to the December 11, 2022. .

Without further ado, here are the 5 players who shone in the Round of 16 of the 2022 World Cup:


The Netherlands continue to put up an impressive performance at the 2022 World Cup. After dominating Group A with two wins and a draw, the De Oranje team performed brilliantly as they eliminated the United States in the round of 16. final. The Netherlands won 3-1 and qualified for the quarter-finals against Argentina (10/12) on the morning of the WIB.

Dutch right-back Denzel Dumfries deserves great appreciation for the success of Louis Van Gaal’s side so far. The Inter Milan player is arguably the most prominent player in the Dutch national team along with Cody Gakpo.

Especially in the round of 16, Dumfries appeared brilliant. He was the actor behind the first two goals for the Netherlands, which were created by Memphis Depay and Daley Blind. His acceleration down the side of the field and his mature bait allowed his two colleagues to easily break into the American goal.

Dumfries vital role not only there. He ended his great evening at the Khalifa International Stadium with a goal that also capped the victory for the Netherlands over the United States.

With a collection of one goal and two assists, Dumfries is clearly one of the Dutch players Argentina need to watch in the quarter-final match at the Lusail Iconic Stadium on Saturday (10/12) early on. Morning Western Indonesian Time.

Kylian Mbappe continues to show his stellar performance at the 2022 World Cup. After scoring three goals in the group stage that helped France qualify as group winners, Mbappe again showed his finesse when France were challenged by Poland in the round of 16 on Sunday (4/12).

Starting with a smooth pass that saw Olivier Giroud go down in history as France’s all-time top scorer (52 goals), Mbappe then stole the show by scoring two classy goals that put Poland on their knees with the score of 3-1.

The PSG star scored in the 74th minute, calmly finding the top right corner of Wojciech Szczesny’s net after Ousmane Dembele played him into space.

In stoppage time, Mbappe scored his second goal of the game, and that was special. Receiving a pass from Marcus Thuram from the left, Mbappe then curled a shot into the top right corner of Szcezny’s goal.

Those two goals added Mbappe’s goalscoring collection from the 2022 World Cup to five goals. The figure puts him at the top of the top scorer chart where he is two goals ahead of his rivals, including Bukayo Saka (England), Richarlison (Brazil) and his PSG teammate Lionel Messi, who has scored just three goals.

Mbappe will once again be a mainstay for France when they face England in the quarter-finals on Sunday December 11, WIB. Mbappe’s speed and individual ability will plague players who line up on the right side of the England defence.

Who would have thought that Morocco could continue to surprise at the 2022 World Cup? After beating world second team Belgium and qualifying from Group F with group winner status, Hakim Ziyech et al continued their beautiful fairy tale in the round of 16.

In this phase, Morocco had to face the 2010 world champion, Spain, much more favored to qualify for the quarter-finals. However, the ball is round and anything can happen. By relying on the collective team, Morocco was able against all odds to hold Spain to a draw and lead the match on penalties.

Meanwhile, in the Moroccan camp, four of the executioners came forward. Only one failed, while the other three namely Abdelhamid Sabiri, Hakim Ziyech and Achraf Hakimi performed their duties well for Morocco to win on penalties with a crushing 3-0 scoreline. The victory allowed Morocco to make history for the first time by qualifying for the quarter-finals of the World Cup.

For Bono, his ability to thwart two Spanish penalty takers cemented his status as a top goalkeeper contender. The Net have only conceded once so far, and even in an own goal in Morocco’s 2-1 win over Canada in the group stage.

Now the question is, can Bono and the Moroccan players continue their great story at the 2022 World Cup? In the quarter-finals, they will face Portugal on Saturday (10/12) evening WIB.

If there’s one player who deserves a special mention in the Croatia-Japan game in the 2022 World Cup round of 16, it’s Dominik Livakovic, the main goalkeeper of Vanetri’s team – nicknamed Croatia.

The goalkeeper belonging to the Dinamo Zagreb club proved to be very solid under the rule by breaking the assaults of the Japanese “samurai”. Conceded by Daizen Maeda’s goal before the end of the first half, Livakovic then paid for it with a perfect performance on penalties.

The Croatia-Japan duel had to go to the penalty shootout after Maeda’s goal was answered by Ivan Perisic where the 1-1 scoreline lasted until two 15-minute extra times took place.

At this moment, Livakovic appeared very heroic. He only missed one or two kicks from Japanese players, but three. Of the four Japanese kickers, Livakovic failed to read the direction of the kick from Takuma Asano, Japan’s third kicker.

Moreover, he was able to correctly guess the kicks of Takumi Minamino, Kaoru Mitoma and Maya Yoshida to lead Krosia to win 3-1 on penalties.

This record made Livakovic the third goalkeeper in World Cup history to manage to save three penalties in an instant. He equaled his senior record Daniel Subasic (2018) and Portuguese goalkeeper Ricardo, who also read three England penalty takers well at the 2006 World Cup.

Moreover, in the quarter-finals later, Livakovic’s abilities will be tested again. This time by the “predators” of the Brazilian national team. The Croatia vs Brazil duel will take place at the Education City Stadium on Friday evening, December 9, 2022, from 22:00 WIB.

The ‘punishment’ given by coach Fernando Santos to Cristiano Ronaldo turned out to be a blessing for Goncalo Ramos. With Ronaldo benched following the overreaction he showed when he was taken off in Portugal’s match against South Korea, Ramos would have appeared as a starter when Portugal faced Switzerland in the round of 16 on Wednesday (7 /12) early in the morning. Time.

Initially, many regretted Santos’ decision to pick the Benfica forward instead of Ronaldo as his starter. Additionally, the competition entered the knockout stage.

However, the results were unexpected. Goncalo Ramos even managed to make Portuguese fans “forget” Ronaldo. In his first game as a starter, Ramos immediately proved his quality by scoring goals. Not just one, but a hat trick, meaning three goals. One in the first half and two goals in the second half.

Scoring a hat trick at the age of 21 made Goncalo Ramos into World Cup history. He is the youngest player to score a hat trick in the knockout stage. Ramos equaled Brazilian legend Pele’s record of doing so at the 1958 World Cup.

With this heroic performance, Goncalo Ramos will once again be Fernando Santos’ first choice when Portugal take on dark horse team Morocco in the quarter-finals on Saturday (10/12) night WIB. If that happens, it will be bad news for Cristiano Ronaldo, who looks set to sit on the bench again.