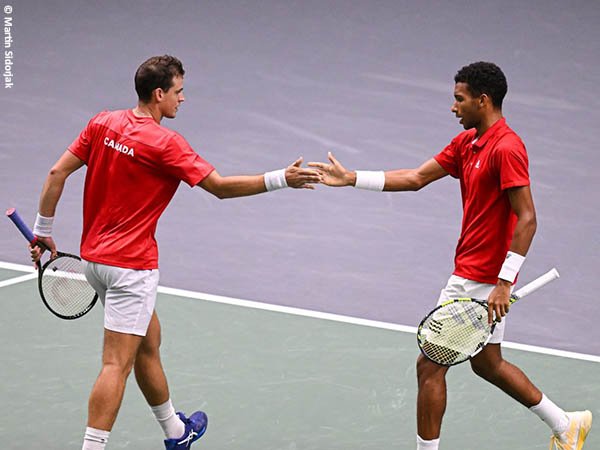 Tennis News: Canada survived a shock defeat on Day 1 of the Davis Cup group stage after Felix Auger Aliassime and Vasek Pospisil won their doubles match against South Korea in Group B.

Starting the Davis Cup Group B match which took place in Valencia, the Canadian team managed to eliminate the South Korean team which was reinforced by Nam Ji Sung and Song Min Kyu 7-5, 5- 7, 6-3.

The South Korean team looked magnificent in the first set earning a break in the opener, but the Canadian team found the right formula until they were able to snatch four straight games from 3-5 to win the first set.

Nam and Song then upped the pressure level in the ninth game of the second set before managing to tie a set. The Korean team kept the momentum going by opening the third set 2-0, but the Canadian team again found a way out of the needle and gave Canada a 2-1 lead.

The Canadians were stuck in the deciding doubles match after Pospisil avoided a surprise loss to Hong Seong Chan by winning 4-6, 6-1, 7-6 in the first singles match, before Kwon Soonwoo sensationally came back to beat the best ranked. 13th in the world, Auger Aliassime 7-6, 6-3 in the second singles match.

The 24-year-old Kwon fought back 1-4 down in the opening set before claiming the biggest win of his career to date against Auger Aliassime.

Reflecting on his first win against a top-20 player, Kwon said, “I’m happy to win because I’m representing my own country. So it’s very, very special. It’s completely different when you play as an individual.”

“For the first time, I beat a top 13 player, a player who is a very, very tough competitor. This victory will help me a lot to continue my tennis career.”

“I think he played really well,” Pospisil commented of Hong. “I know players can perform well in Davis Cup competitions when they are highly motivated.”

“I think what hurt me in this game was the start of the game. It was like I was struggling with momentum. He gained confidence as the game went on. I think he played very well.”