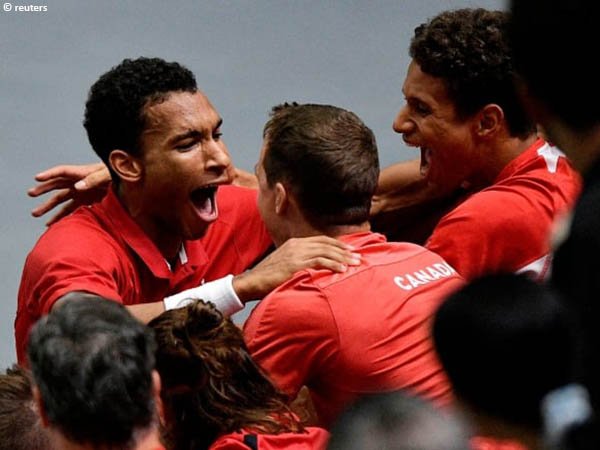 Tennis News: Canada have booked a place in the Davis Cup final to be played in Malaga in November despite losing to Serbia 2-1 in Group B.

Canadian Felix Auger Aliassime secured Canada’s place in the Davis Cup final in Malaga with a 6-3, 6-4 win over Serbian Miomir Kecmanovic in their second singles match.

With a 1-1 draw, Canada has a chance to top Group B with victory in the doubles match.

However, Canadian Vasek Pospisil, who put his body on the line at Valencia this week, managed just three games before retiring with a knee injury in a doubles match with compatriot Alexis Gallarneau to give the victory to Serbia of Kecmanovic and Filip Krajinovic.

“It was a big effort,” said an emotional Pospisil. “Obviously I push my body to the limit on the day I fight. Based on previous test results, I may need to rest for a few weeks. It is reality. It’s really unfortunate.”

“But we qualified, it’s amazing. What a week for the team, myself and everyone involved. It’s a wonderful memory. For my part, I just hope I can recover as soon as possible and be ready for the ATP and Malaga tournaments.”

Auger Aliassime, who scored an impressive win over world number 1 Carlos Alcaraz and helped Canada win the doubles match against Spain, is very active in helping his country in Malaga from November 22-27.

Although he played well in the first set against South Korea, he lost to Kwon Soonwoo, but from then on everything he touched turned into a win.

“I think my level of play throughout this Davis Cup is very good. I played well in doubles. I’m very satisfied with my level of play. To play like that, to win, that’s very good in my personal opinion. I’m really happy for my team,” said Auger Aliassime.

“It’s great to see smiles on everyone’s faces, to make the team happy and proud. That’s why I came here. I’m really happy to have come and played at a level where I can take Canada to the next round.