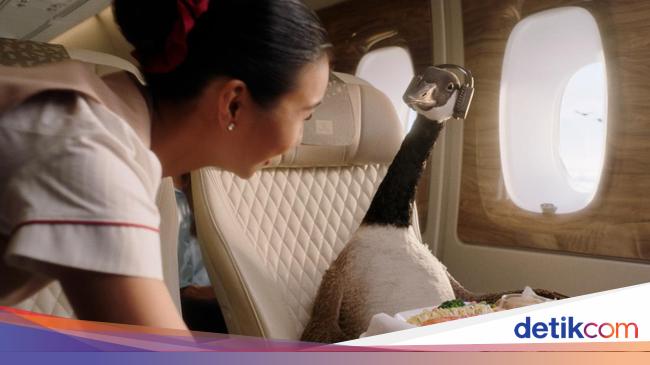 Airlines companies Emirates have a new advertising star. Not a human, let alone a famous artist. He is Gerry The Goose aka Gerry The Goose. Come on, get acquainted!

From September, global advertising campaign Emirates will air worldwide with a new star. His name is Gerry. He is not a famous actor or actress.

It wasn’t even a human, but a swan. Yes, he is Gerry The Goose aka Gerry the Goose.

The storyline for the ad campaign follows Gerry’s journey as he flaps his wings deciding to “fly better” in the Premium Economy cabin. Emirates comfortable and sophisticated.

Meanwhile, its migrating brethren are in a “poultry mood” after a long and tiring flight on the wings. Gerry looks arrogant as he passes his friends flying outside the airplane window.

As Gerry the Swan is seen tucking into delicious food and leaning back in his spacious chair, enjoying the film’The goose, the brute and the ugly‘ on his 13.3-inch personal entertainment screen.

“In terms of the quality and profile we are looking for in our new Brand Ambassador. Gerry is a savvy explorer and knows what he wants and where he wants to go. However, he insists on doing it in style, with luxury and comfort as priorities.” said SVP Marketing & Brand EmiratesRichard Billington in his statement, Sunday (11/9/2022).

“After witnessing her smooth travel experience, we’re sure her friends will vote for ‘Fly Better’ in the future,” Richard continued.

Gerry the Goose himself began his career at Emirates Headquarters, Dubai where the travel concept was conceived and started flying. Later, Gerry’s concept was sent to Untold Studios in London, where an early 3D model of the swan was brought to life via computer generated imagery (CGI).

The CGI and filming process took 14 weeks and involved a talented team that perfected every animation as well as lighting and textures, continuing to provide the carefully crafted movements to bring these characters to life.

This process also included bringing Gerry’s friends to life, a photo shoot in London to capture the natural scenery, and a photo shoot on board an Emirates flight in Dubai.

TV ad campaign Emirates was a springboard for Gerry’s relatively new acting career. This ad will air in 25 countries for one month, starting August 30.

Gerry The Goose itself is taken from the species of Canadian goose (Branta canadensis), a large wild goose with a black head and neck, white cheeks, white under the chin, and a tan body.

They are native to the polar and temperate regions of North America and can be found migrating across the Atlantic into northern Europe.