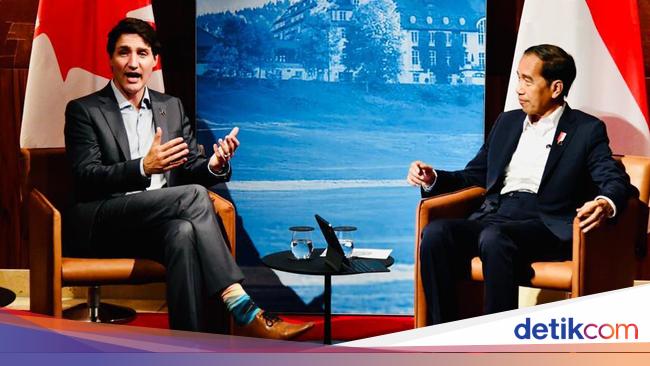 President Joko Widodo (Jokowi) spoke about the 70th anniversary of Indonesia-Canada relations during his meeting with Canadian Prime Minister Justin Trudeau. Jokowi pledged to continue to increase cooperation between the two countries.

Jokowi encourages stronger economic cooperation by completing the Indonesia-Canada Comprehensive Economic Partnership Agreement (ICA-CEPA) negotiations in 2023. This would be a positive signal for Indonesian and Canadian businesses.

On this occasion, Jokowi also expressed his gratitude for Canada’s full support for the Indonesian G20 Presidency.

Jokowi’s speech at the G7 summit

Jokowi previously called on the G7 and G20 countries to jointly overcome the food crisis which now threatens people in developing countries to sink into extreme hunger and poverty. Jokowi shared her views during the second session of the G7 Summit, which raised the topic of food security and gender equality.

“(There are) 323 million people in 2022, according to the World Food Programme, who are at risk of facing acute food insecurity. The G7 and G20 have a huge responsibility to deal with this food crisis. Let us assume our responsibilities , now, and right now,” Jokowi said.

Jokowi said food is the most fundamental human rights issue. According to him, women from poor families are certainly those who suffer the most from food shortages for their children and their families.

“We must act quickly to find concrete solutions. Food production must be increased. The global food and fertilizer supply chain must return to normal,” Jokowi said.

In his speech, Jokowi underlined the importance of the support of the G7 countries for the reintegration of wheat exports from Ukraine and food and fertilizer exports from Russia into global supply chains.

Also discover the British Prime Minister’s “hot shot” in Jokowi on the sidelines of the G7 summit: