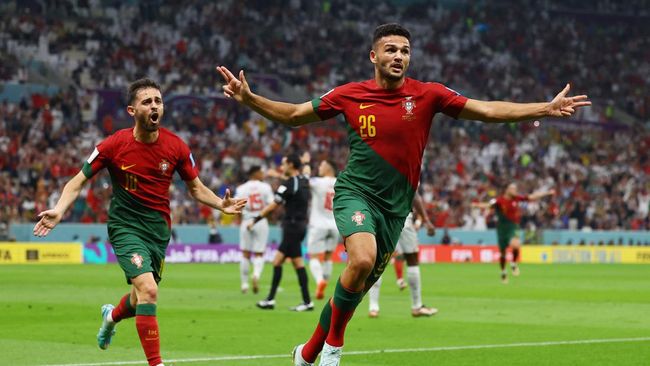 The 2022 World Cup quarter-final can be watched on SCTV, Indosiar, Vidio, Nex Parabola and Champions TV at 10:00 p.m. WIB.

Morocco became the surprise team for the quarter-finals of the 2022 World Cup. After successfully leading the Group F standings, ahead of Croatia and Belgium, the Atlas Lions managed to eliminate one favorites to win the 2022 World Cup, Spain, via a penalty shootout.

In the Round of 16, the Atlas Lions held Spain 0-0 for 120 minutes, before eventually winning 3-0 on penalties.

Moroccan coach Walid Reragui is expected to continue downsizing his best squad. Names such as Hakim Ziyech, Sofiane Boufal, Achraf Hakimi and Yassine Bounou are expected to become the starting XI for the game against Portugal.

Meanwhile, Portugal qualified for the quarter-finals after beating Switzerland 6-1. Selecao das Quinas’ run in the 2022 World Cup has gone smoothly so far.

Portugal managed to win two out of three matches in Group H and qualify for the Round of 16 as group winners. Then, Fernando Santos’ men slaughtered Switzerland in the round of 16.

The figure in the spotlight in the Portugal squad ahead of the game against Morocco is their captain, Cristiano Ronaldo.

After not starting in the match against Switzerland, the Portuguese locker room was hit by bad news. Ronaldo reportedly threatened to leave the Portugal team.

It was also reported that the player with the number 7 back refused to train with Portugal’s reserve players during the game against Switzerland. However, the Portuguese Football Federation (FPF) denied that Ronaldo was angry and threatened to quit the national team at the 2022 World Cup.

FPF confirmed this through a statement posted on its official website on Thursday (8/12).

Ronaldo also denied the news by writing a message on his personal Instagram.

“A team too tight to be broken by outside force. A nation too brave to be scared off by any enemy,” Ronaldo wrote.

The second encounter came at the 2018 World Cup, where Ronaldo’s only goal saw Portugal win 1-0.