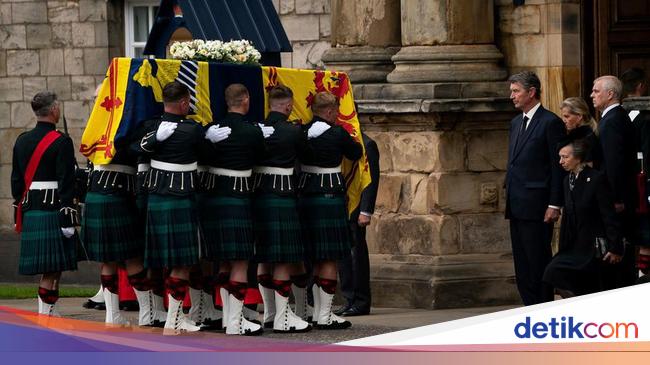 A hearse carrying the coffin of Queen Elizabeth II has arrived at the Palace of Holyroodhouse, the residence of the King of England in Edinburgh, the Scottish capital, after a six-hour drive from Balmoral Castle.

Hundreds of people gathered along the streets of Edinburgh to catch a glimpse of the funeral procession. People cheered and threw flowers to honor them.

England’s King Charles III will fly to Edinburgh to join his family and loved ones on Monday (09/12) when the coffin of his mother, Queen Elizabeth II, is carried in a solemn procession from one of its castles Scottish at the city’s historic St Giles Cathedral. .

King Charles will also join members of the Royal Family on duty at the church, where the coffin will rest, before being flown to London on Tuesday (13/09).

From the death of Elizabeth aged 96 at Balmoral Castle, a series of carefully crafted plans for the moment of mourning the passing of the Queen of England, who reigned for 70 years.

Before leaving for Scotland, Charles, who automatically becomes king of England and 14 other territories including Australia, Canada, Jamaica, New Zealand and Papua New Guinea, will visit the British parliament as part of a typical British royal ceremony.

At Westminster Hall, lawmakers from the House of Commons and Upper House of Lords will offer their condolences on the death of his mother, and the new king will respond.

He would then fly to Edinburgh with his wife Camilla, to join his sister Anne, and brothers Andrew and Edward. The royal family then walked behind the hearse as their mother’s coffin was carried to St Giles’ Cathedral flanked by soldiers.

Upon arrival at the church, the Duke of Hamilton and Brandon, as principal administrators of the British Empire in Scotland, will place the Scottish crown on the coffin.

After the service, the coffin will rest in the cathedral for 24 hours while the Scottish public pay their respects. The continuous guard will be ensured by soldiers of the Royal Company of Archers.

Charles will also visit the Scottish Parliament and meet Scottish First Minister Nicola Sturgeon at 7.20pm local time with other members of the Royal Family.

The public is allowed to pay their respects to the body of the late Queen Elizabeth II which will be protected by the royal standard with the orb and the royal scepter placed in her coffin.

Meanwhile, the question of Australia’s referendum to become a republic has resurfaced following the death of Queen Elizabeth II, who is also Australia’s head of state. Previously, the issue of a referendum to turn Australia into a republic was raised by Australian Prime Minister Anthony Albanese when he won the May 2022 election.

However, regarding the referendum speech, Albanese believes that now is not the right time for change. Albanese said it was a time to pay tribute to the life of Queen Elizabeth II.

Many consider Australians’ respect and affection for the late Queen Elizabeth II to be the biggest obstacle to the country becoming a republic with its own head of state.

Albanese, who describes himself as the first candidate with a “non-Anglo-Celtic name” to run for prime minister in 121 years in office, created the new post of Deputy Republic Secretary and appointed Matt Thistlethwaite in June. Thistlethwaite said nothing would change as long as Queen Elizabeth II was alive and Australia’s head of state.

“Now is not the time to talk about our system of government,” Albanese told the Australian Broadcasting Corp. “Now is the time for us to honor the life of Queen Elizabeth, a life well lived, a life of dedication and loyalty, including to the people of Australia and for us to honor and mourn.”

Albanese said earlier that a Republican referendum was not a priority in his first three-year term in government.