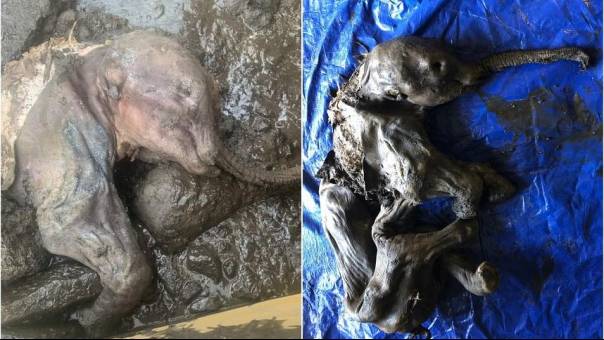 OTTAWA, KOMPAS.TV – Miners in the Klondike goldfields in Canada’s far north have made the rare discovery of the near-complete mummified remains of a baby woolly mammoth.

I like reports Straits timeSunday (26/06/2022) the baby woolly mammoth is believed to be female and died during the ice age more than 30,000 years ago when woolly mammoths roamed the region with wild horses, cave lions and giant steppe bison.

Paleontologist Grant Zazula said the baby mammoth, which retained its skin and hair, was “incredibly beautiful and one of the most extraordinary Ice Age animal mummies ever found anywhere in the world”.

“I’m excited to get to know him more,” he said in a statement.

The remains of a baby mammoth were discovered during digs in the permafrost south of Dawson City in Canada’s Yukon Territory, which borders the US state of Alaska.

Being part of the recovery of Nun cho ga, the baby woolly mammoth found in the Klondike permafrost this week (Solstice and Indigenous Peoples Day!), has been the most exciting science thing I have ever been involved in, without exception . https://t.co/WnGoSo8hPk pic.twitter.com/JLD0isNk8Y

A partial mammoth calf, named Effie, was discovered in 1948 in a gold mine deep in Alaska.

A 42,000-year-old mummified baby mammoth known as Lyuba was also discovered in Siberia in 2007. Lyuba and Nun cho ga are about the same size, according to the Yukon government.

It says the Yukon has “a world-famous fossil record of Ice Age animals, but mummified remains with skin and hair are rare.”