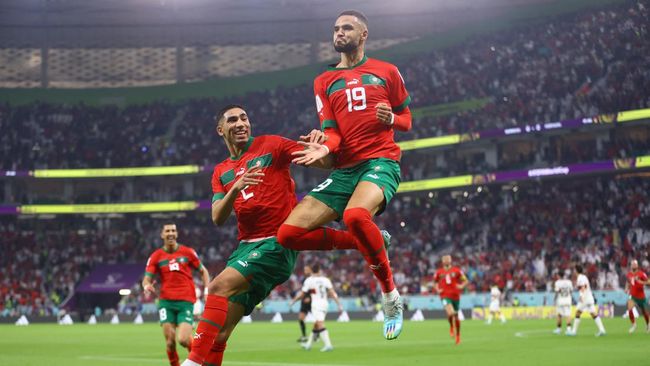 Morocco achieves success in World Cup 2022. Now one step away from the final and it’s not impossible at 180 minutes to lift the cup.

Few or no one saw Morocco as a dark horse team at the World Cup. The achievements of representatives of African countries in the previous World Cup were quite ordinary. Only cheers from the group stage reached the round of 16 by surprise in 1986.

Morocco’s name was also less flashy than Senegal’s or Cameroon’s, and recently it was also overtaken by Egypt, which caught the eye because of Mohamed Salah, even though he failed to qualify for the World Cup.

Nevertheless, it is undeniable that Morocco have names that can attract attention as they play in the top European leagues such as Achraf Hakimi, Hakim Ziyech or Youssef En Nesyri.

Hold Croatia to a draw, then beat Belgium to become Morocco’s first gong. After beating Canada, the Atlas Lions then proved they didn’t just add color to the 2022 World Cup when they conquered Spain and Portugal in the knockout stage.

Mother’s blessings and God’s pleas for hope certainly cannot be separated from the milestones of the human journey, but there are other things in life that cannot be forgotten. Effort.

The current Moroccan national team is the result of the country’s efforts to rebuild the football that triumphed in the 1970s to 1990s.

Quoting the General President of the Moroccan Football Federation on the official website Fifacoaching football in Morocco is inseparable from the triangle of infrastructure, talent and qualified personnel.

With this formula, Morocco then serves as a reference in the development of football in other countries. More than that, the sweet fruit of that hard work is now being felt by Walid Reragugui and his adopted children.

Continue reading this article on the next page>>>


READ THE NEXT PAGE