Croatia vs Brazil Prediction at the 2022 World Cup 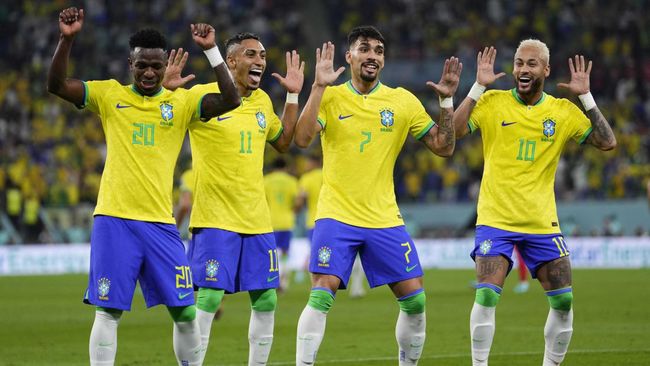 That year, Croatia qualified for the Qatar 2022 knockout stage after finishing ahead of Belgium and Canada, and one place behind Morocco in Group F.

Brazil have a class record against Croatia. The Samba team has never lost in four games. Brazil last beat Croatia in a friendly in June 2018 2-0.

Regarding the formation of the team, Brazil are a very attacking team and somewhat unbalanced in midfield. Croatia can take advantage of this situation, which has the best midfielders in the world like Luka Modric, Marcelo Brozovic and Mateo Kovacic.

Brazil will likely put more pressure and confuse the Croatian defence, but Modric and his friends won’t be easily beaten. Croatia actually have the chance to hurt Brazil with a counterattack plan.

Croatia can surprise Brazil in this game. Score 2-1 for Croatia.

Brazil’s skillful game when they beat South Korea proved that the Selecao have extraordinary strength on the front lines. Just like in the round of 16, Tite’s team immediately put the gas in the first minute.

Croatia will certainly defend more, hoping for a counterattack down the left by Ivan Perisic. Interestingly, Eder Militao’s game as a right-back was one of Brazil’s weak points against South Korea.

In the 2022 World Cup, Croatia never lost. Of the four matches, three of them ended in a draw. This shows that the Croatian defense is quite calm against tough teams.

Croatia are also unbeaten in the last 10 matches. At the same time, Brazil lost once in the group stage, namely Cameroon. At that time, Brazil appeared with a covering team, including Neymar who was absent due to injury.

I predict that this duel will end in a penalty shootout and Croatia will be the winner.

Croatia is not in an ideal state


READ THE NEXT PAGE