After the first half, Morocco beat Canada 2-1 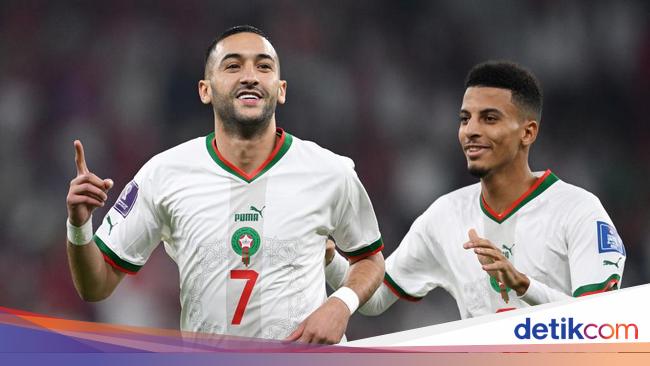 a leg Morocco already in the round of 16 World Cup 2022. Confront Canada in the last match of Group F, the Atlas Lions ended the first half with a 2-1 advantage.

Playing at the Al Thumama stadium on Thursday (1/12), Morocco immediately took the lead in the 4th minute. Starting from the error of the Canadian goalkeeper, Milan Borjan, who fired a short pass but the ball actually went towards hakim ziyech.

The Chelsea winger easily fired a measured shot into the Canadian goal which was empty and left by Borjan. Morocco leads 1-0.

Canada tried to equalize in the 15th minute. Thanks to a counter-attack, Cyle Larin fired a sharp cross in front of the Moroccan goal. Tajon Buchanan was there, but couldn’t hit the ball perfectly, so he shot wide.

Instead of equalizing, Canada conceded another goal in the 23rd minute. Achraf Hakimi fired a long ball from his own defensive area, towards Youssef En-Nesyri who was running towards the opposing penalty area.

Despite being escorted by two Canadian players, En-Nesyri managed to control the ball and then fired a powerful shot into the bottom right corner of the goal without Borjan being able to block it. Score at 2-0 for Morocco.

Although they had no hope of qualifying, Canada did not want to lose. The Reds’ efforts to score a goal finally paid off in the 40th minute.

Moroccan defender Nayef Aguerd tried to cut off a cross coming from the right of the defense, but turned towards the goal. Moroccan goalkeeper Yassine Bounou tried to hold back, but the ball kept coming.

En-Nesyri scored another goal through a dead ball situation in added time, but the referee disallowed it for offside. The 2-1 score for Morocco lasted until halftime.