Nasty! Vegetarian passengers ask for food, why are they only given water? 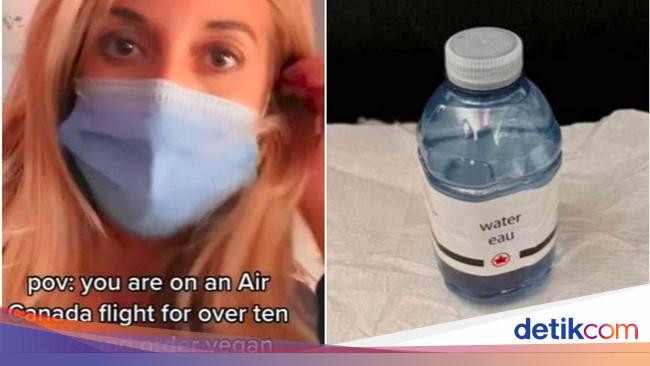 This vegetarian passenger had an unpleasant incident while boarding the plane Air Canada. He only received water for the 10 hour journey.

Miriam Porter, travel blogger and vegetarian, said she was very disappointed with the airline’s treatment Air Canada which he rode from Toronto, Canada to Frankfurt, Germany.

Since she doesn’t eat meat, Miriam requested a special vegan meal for the flight. But what was Miriam’s surprise when an Air Canada flight attendant delivered her the vegan food she had ordered: just a bottle of water.

Miriam also made a Tiktok video regarding the Air Canada airline treatment. The video shows a bottle of water Miriam received during the 10 hour flight.

It was Miriam’s first “vegan” meal. The next “vegan” food is the fabric with the logo Air Canada without food on it.

“POV: you took a flight Air Canada for over 10 hours and ordered vegan food,” Miriam wrote.

The Tiktok video posted by Miriam has been watched by more than 1.2 million people. More than 1,000 travelers commented on the incident.

“The menu is quite tempting,” replied another traveler sarcastically.

But finally, there are the air hostesses Air Canada who took pity on Miriam. They took the initiative to get fruit and bread in business class. Miriam also admitted that this incident is not the first time she has seen it.

“Praise the nice stewardess who gave fruit and bread from business class. It’s not the first time this has happened to me, there have been many times like this before. I always bring my own food, but this time I didn’t have time to cook it,” Miriam concluded.

Air Canada has not released an official statement regarding the case that happened to one of its clients.