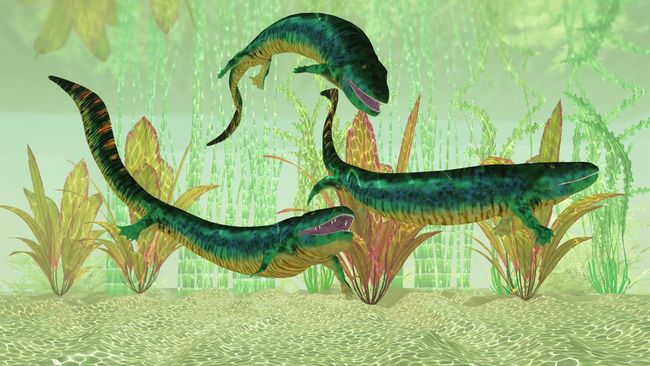 Instead of moving to the mainland, fish An ancient who lived around 365 million years ago returned to the water and refused to follow in the footsteps of other fish species to evolve. Who is he?

It is known from fossil discovered in 2004 during an expedition in the Canadian Arctic region. Launch The conversation, the scientists saw a fragment of the chin with a length of about 5 cm and the teeth of the fossil. There are also parts of white scales with a lumpy texture.

Anatomy gave clues to experts that this was an early tetrapod. Tetrapods are a group of fish that left water to live on land 350 million years ago.

This group of fish is the ancestor of thousands of species, such as amphibians, birds, lizards and mammals. However, the fossil discovered in 2004 was unlike any other tetrapod.

This became known after experts used CT Scanning technology on the fossil. From there, experts found a set of fins that indicate how tetrapods evolved and how they lived.

For example, based on the shape of skeletal bones, experts can predict whether an animal is swimming or walking. After going through several scans and increasing the resolution of the image, experts found that the fossil was closely related to a legged vertebrate and was a new species.

Launch Scientific alert, experts named the fossil Qikiqtania Wakei. The genus name is spelled as “kick-kiq-tani-ahh” which refers to the Inuktitut word Qikiqtaaluk or Qikiqtani, the traditional name for where the fossil was found.

When these fish lived hundreds or millions of years ago, the area was a warm environment with many rivers and streams. While the name Wakei is taken from the scientist David Wake who inspired the experts to carry out the expedition.

Of all the parts of Qikiqtania, it is the palm that attracts the most experts. Typically, tetrapods such as the Tiktaalik have prominent ridges on the underside and a distinctive set of ridges, to which muscles attach.

The bone pieces indicate that early tetrapods lived at the bottom of lakes and rivers and used their fins or arms for support, first on land underwater, then on land.

However, Qikiqtania’s humerus is different because it does not have these protrusions. Instead, it is thin and boomerang-shaped, while the rest of the fin is wide and oar-shaped. Fins are generally intended for swimming.

From this form, experts predict that Qikiqtania is not interested in moving to land, once again choosing to leave it and live in open water. Meanwhile, other tetrapods prefer to play by the water while learning what the land has to offer.

The discovery of Qikiqtania leads experts to believe that the evolutionary process does not proceed in a linear fashion towards humans. It is a complex process that together grows the tree of life.

New species form and differentiate. The branches of the species can point in many different directions.